OpenStore is designed to operate 24/7/365 and to achieve that OpenStore uses modules that operates independent of each other. For example a massive peak in the Inflow does not affect anything else in the system. This also makes maintenance a smooth process.

OpenStore can deployed in-house or as a cloud service on Amazon.

Data storage  is also modular which means that different backup and recovery strategies can be used depending on how time critical the access of data is. This means that for example files that are not frequently used can be stored on cheaper media.

Another advantage with a modular system like OpenStore is that the load can be shared by different servers and processes. Modules or processes can be installed on any option of servers depending of the need which makes temporary peaks easy to manage. 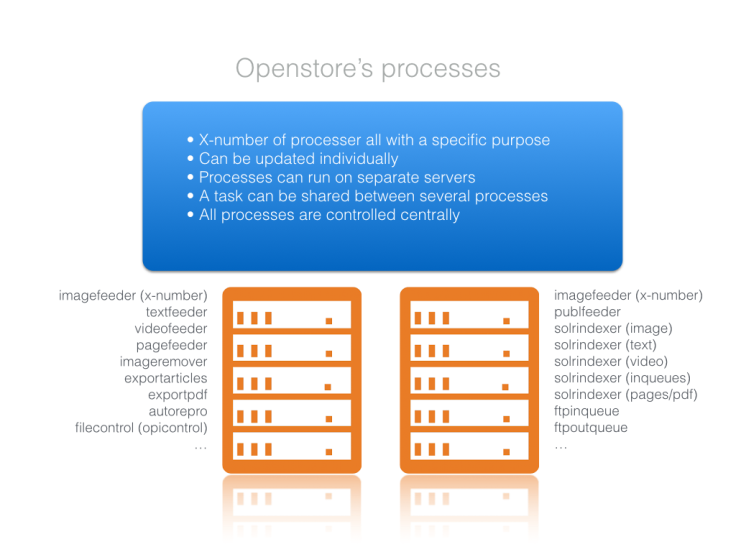 There are different ways to integrate OpenStore with other systems and a lot of effort is made to makes the process as smooth as possible. Different strategies can be deployed depending on specific needs;

The documentation is designed so that every call to the API has it’s own test page that developers can reach using a web browser and can be separately tested to confirm it’s functionality.

OpenStore Mini is a web based ”one page application” built with OpenStore API and can be an important part in a system integration. OpenStore Mini is suited to be integrated in other systems through so called Web views (for example Newspilot). This means that on another webpage insert OpenStore Mini in an intended place so that the user doesn’t feel he or her leaving the webpage when retrieving data from OpenStore.

A few examples of different integrations

The Newspilot server is using the OpenStore API to retrieve images to Newspilot using drag and drop or by Web views. Articles produced by Newspilot can also easily be imported to OpenStore because of support for Newspilots XML format.

The integration is founded on OpenStores FTP flow and webrepro. When a user chooses to publish an image in Escenic the user can either send it Escenic using OpenStores built-in FTP or using webrepro where a ”softcrop” is performed and the result is sent to Escenic together with an XML file describing the object.

The integration is founded on OpenStores autorepro, FTP flow and webrepro. When a user chooses to publish an image in Episerver the user can either send it to Episerver using OpenStores built-in FTP or using webrepro where a ”softcrop” is performed and the result is sent to Episerver together with an XML file describing the object. After publish (typically a day summery one day after publish) Episerver send’s Openstore a log of which images that actually was published, and Openstore automatically generates a images report sent to image suppliers (bureaus)